How Does MR Work?

MRI uses magnetic energy and radio waves to create cross-sectional images or "slices" of the human body. The main component of most MR systems is a large tube-shaped or cylindrical magnet. Also, now available are MR systems with a C-shaped magnet or other type of open design. The strength of the MR system's magnetic field is measured in metric units called "Tesla". Most of the cylindrical magnets have a strength between 0.5 and 1.5 Tesla and most of the Open or C-shaped magnets have a magnetic strength between 0.01 and 0.35 Tesla. A 1.5 Tesla MR system has a magnetic field 30,000 times stronger than the pull of gravity on the earth's surface. 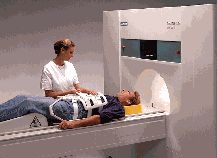 The patient aperture or bore of the cylindrical magnet is usually between 55 cm and 65 cm wide (21.6" to 25.6") and they have a total end to end length of 160 cm to 260 cm (5â€˜ 3" to 8' 6"). Approximately 3% of MR patients suffer from claustrophobia and may not tolerate an MR exam in a traditional cylindrical MR system. These patients may now have the option of having an MR study with an Open MR system where typically many sides of the system are open and claustrophobic anxiety is lessened.

To begin the MR examination, the patient is positioned on a special table and positioned inside the MR system opening where the magnetic field is created by the magnet. Each total MR examination typically is comprised of a series of 2 to 6 sequences, with each sequence lasting between 2 and 15 minutes. An "MR sequence" is an acquisition of data that yields a specific image orientation and a specific type of image appearance or "contrast." Thus a typical exam can last for a total of ten minutes to an hour, depending on the type of exam being run and the MR system being used.

During the examination, a radio signal is turned on and off, and subsequently the energy which is absorbed by different atoms in the body is echoed or reflected back out of the body. These echoes are continuously measured by the MR scanner and a digital computer reconstructs these echoes into images of the body. The tapping heard during the MR exam is created when "gradient coils" are switched on and off to measure the MR signal reflecting back out of the patient's body. A benefit of MRI is that it can easily acquire direct views of the body in almost any orientation, while CT scanners typically acquire images perpendicular to the long body axis.

Medical images taken of the human body are acquired or displayed in three main orientations:


Views which are combinations of the above three orientations (called oblique views) can also be directly acquired with the MR system. These oblique views are especially important for orthopedic and sports medicine applications when tendons and ligaments that run at oblique angles need to be clearly imaged.