Mammography is a special type of x-ray imaging used to create detailed images of the breast. It is estimated that 48 million mammograms are performed each year in the United States. Mammography uses low dose x-ray; high contrast, high-resolution film; and an x-ray system designed specifically for imaging the breasts. Successful treatment of breast cancer depends on early diagnosis. Mammography plays a major role in early detection of breast cancers. The US Food and Drug Administration reports that mammography can find 85 to 90 percent of breast cancers in women over 50 and can discover a lump up to two years before it can be felt. The benefits of mammography far outweigh the risks and inconvenience. 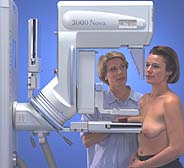 Mammography can show changes in the breast well before a woman or her physician can feel them. Once a lump is discovered, mammography can be key in evaluating the lump to determine if it is cancerous. If a breast abnormality is found or confirmed with mammography, additional breast imaging tests such as ultrasound (sonography) or a breast biopsy may be performed. A biopsy involves taking a sample(s) of breast tissue and examining it under a microscope to determine whether it contains cancer cells. Many times, mammography or ultrasound is used to help the radiologist or surgeon guide the needle to the correct area in the breast during biopsy.

There are two types of mammography exams, screening and diagnostic:


How is Mammography Performed?

During mammography, the technologist will position the patient and image each breast separately. One at a time, each breast is carefully positioned on a special film cassette and then gently compressed with a paddle (often made of clear Plexiglas or other plastic). This compression flattens the breast so that the maximum amount of tissue can be imaged and examined.

At some facilities, mammography technologists may place adhesive markers to the breast skin prior to taking images of the breast. The purpose of the adhesive markers is twofold: first, to identify areas with moles, blemishes or scars so that they are not mistaken for abnormalities, and secondly, to identify areas that may be of concern (e.g. a lump was felt during physical examination). Some centers routinely mark the nipple with a small dot to provide a clear "landmark" for the radiologist on the mammogram images. See the section below on skin markers for more information.

To "take" a mammogram, the x-ray source is turned on and x-rays are radiated through the compressed breast and onto a film cassette positioned under the breast. The x-rays hit a special phosphor coating inside the cassette. This phosphor glows in proportion to the intensity of the x-ray beams hitting it, thus exposing the film with an image of the internal structures of the breast. Highly sensitive film and special x-rays are used for mammography to create the highest quality images at the lowest exposure.

The resulting "exposed film" inside the cassette is then developed in a dark room much like a regular photograph is developed. It is the special energy and wavelength of the x-rays that allow them to pass through the breast and create the image of the internal structures of the breast. As the x-rays pass through the breast, they are attenuated (weakened) by the different tissue densities they encounter. Fat is very dense and absorbs or attenuates a great deal of the x-rays. The connective tissue around the breast ducts and fat is less dense and attenuates or absorbs far less x-ray energy. It is these differences in absorption and the corresponding varying exposure level of the film that create the images which can clearly show normal structures such as fat, fibroglandular tissue, breast ducts, and nipples. Further, abnormalities such as microcalcifications (tiny calcium deposits), masses, and cysts are also visible.

The developed mammography films are then interpreted by a radiologist, who compares the new images of a woman's breast to each other and to previous mammograms a woman has had. The radiologist will look for shadows and patterns of tissue density to detect any abnormalities.

A mammogram is like a fingerprint; the appearance of the breast on a mammogram varies tremendously from woman to woman, and no two mammograms are alike. It is extremely helpful for the radiologist to have films (not just the report) available from previous examinations for comparison purposes. This will help the doctor to recognize small changes that occur gradually over time and detect a cancer as early as possible.

As of April 28, 1999, a new version of the Mammography Quality Standards Law mandates that all women who have mammograms must be informed of the results in writing. However, if you have not been informed of your results within a week or so of your mammogram, do not assume they are normal. Follow up with your referring physician or healthcare provider who will provide you with the results.