What is Large Core Biopsy?

Large core breast biopsy (also called ABBI, which is a brand name that stands for Advanced Breast Biopsy Instrumentation) is a surgical technique that involves removing an entire intact breast lesion (abnormality) under image guidance. While the ABBI procedure tends to be less invasive than the traditional open surgical biopsy, this technique has not gained widespread acceptance. 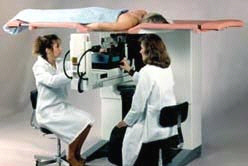 Large core biopsy requires the use of a prone biopsy table (the patient lies face down) and stereotactic mammography imaging equipment. Stereotactic mammography uses computers to pinpoint the exact location of a breast mass based on mammograms (x-rays) taken from two different angles. The computer coordinates will help the physician to guide the large core sampling device to the correct area of the breast.

Large core biopsy (ABBI) can remove 5 millimeters (mm) to 20 mm of breast tissue. The procedure also allows the radiologist or surgeon to remove the entire lesion in one non-fragmented piece. However, some medical professionals question the benefit of this.

How Should Patients Prepare for Large Core Biopsy?

As with any surgical procedure, patients are typically given detailed instructions by their physician and anesthesiologist in advance of the day of their biopsy. Often, patients will be told to avoid aspirin, ibuprofen, or other medications that prolong bleeding for five to seven days prior to the biopsy. Patients should also ask their physicians if they should discontinue using blood thinners prior to the biopsy.

On the day of the large core biopsy, women should wear a comfortable two piece garment. Patients should not wear talcum powder, deodorant, lotion, or perfume under their arms or on their breasts on the day of the biopsy.

How is Large Core Biopsy Performed?

As with any biopsy procedure, the breast is first cleaned. During the large core biopsy (ABBI) procedure, local anesthetic is injected while the breast is maintained in compression. A wire is then guided into the breast lesion using stereotactic mammography. Next, a narrow tube with a cutting device (a cannula, also called the large core needle) is inserted into the breast, using the wire as a guide. The core specimen of the breast tissue is then removed with a looped wire and taken to the pathology laboratory for diagnosis.

The lesion removed with large core biopsy (ABBI) is contained within a protective cylinder shell so that the surrounding normal breast tissue is not exposed to the operative site. Additional mammograms of the breast and the removed specimen are performed after the procedure to confirm the biopsy. Due to the size of the large biopsy section, stitches are usually required. Large core biopsy (ABBI) takes approximately one hour, often followed by several hours of recovery.

What Should Patients Expect After Large Core Biopsy?

Large core biopsy (ABBI) requires stitches and a long recovery than percutaneous ("through the skin") breast biopsy procedures (such as fine needle aspiration (FNA), core needle biopsy, or vacuum-assisted biopsy). Patients may be instructed to take Tylenol or other pain relievers for discomfort if needed. Some bruising of the breast area may occur during the first five to seven days after large core biopsy (or longer if initial bleeding during biopsy was greater than usual). Temporary bruising of the breast is normal and is usually not a medical concern.

Why is Large Core Biopsy Controversial?