X-ray angiography is performed to specifically image and diagnose diseases of the blood vessels of the body, including the brain and heart. Traditionally, angiography was used to diagnose pathology of these vessels such as blockage caused by plaque build up. However in recent decades, radiologists, cardiologists and vascular surgeons have used the x-ray angiography procedure to guide minimally invasive surgery of the blood vessels and arteries of the heart. In the last several years, diagnostic vascular images are often made using MR, CT and/or ultrasound and while x-ray angiography is reserved for therapy.

Conventional x-ray angiography has a lead role in the detection, diagnosis and treatment of heart disease, heart attack, acute stroke and vascular disease which can lead to stroke.

What to Expect During an Angiography Examination 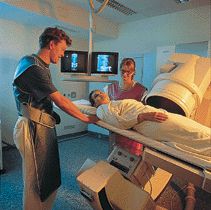 The doctor and technologist assure a patient before angiography 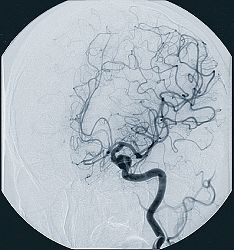 Angiogram of carotid artery and arteries of the brain

Using angiography to see inside the body, doctors can repair blood vessels without the use of a scalpel and fully invasive surgical methods. Advances in the design and use of catheters (small tubes that are guided into the blood vessels through tiny incisions in the groin area or upper arm) allow physicians to perform very complex therapeutic procedures from within the blood vessel. Pathology of the blood vessels such as plaque build up in the arms and legs, neck and brain, and heart can be treated using a variety of interventional angiographic surgery (e.g. coronary angioplasty).

Coronary bypass surgery is a common, but invasive surgical procedure in the United States. During bypass surgery, synthetic blood vessels or vessels grafted from other parts of the body are used to create an alternative passage. This new vessel or "bypass" functions in place of the clogged blood vessel to feed the heart's tissue with blood, nutrients and oxygen. However, a new technique called coronary artery angioplasty can be performed without invasive surgery. In this method, angiography is used to guide surgical stents (small cylindrical supports) into place in order to re-open clogged blood vessels.

How Does Angiography Work?

Angiographic x-ray imaging has grown into its own classification of x-ray imaging over time. The basic principal is the same as a conventional x-ray: x-rays are generated by an x-ray tube and as they pass through the body part being imaged, they are attenuated (weakened) at different levels. These differences in x-ray attenuation are then measured by an Image Intensifier and the resulting image is picked up by a TV camera. In modern angiography systems, each frame of the analog TV signal is then con verted to a digital frame and stored by a computer in memory and/or on hard magnetic disk. These x-ray "movies" can be viewed in real time as the angiography is being performed, or they can be reviewed later using recall from digital memory.

During angiography, physicians inject streams of contrast agents or dyes into the area of interest using catheters to create detailed images of the blood vessels in real time. During the angiographic procedure, physicians can guide a catheter into the area of interest to remove stenoses (blockages) of blood vessels. Patients with blockages of the major leg vessels, for instance, can have nearly total recovery after angioplasty is performed to remove the constriction.